There is no shortage of potential stacks worth targeting here for the DraftKings NFL Week 5 Millionaire Maker. We will share the stack we ended up rolling with shortly, but a close runner-up was Joe Burrow and Ja’Marr Chase. With Jaire Alexander out, the Packers are now arguably a bottom-five secondary in the NFL.

The running back position is a mess this week on DraftKings with a ton of players questionable and their backups extremely overpriced. Derrick Henry is the clear number one, but with 113 carries in four weeks and a cake matchup, there is a chance the Titans give Henry a somewhat lighter workload.

As tough as RB is, WR has loads of options here in week 5. Outside of our targets, we think AJ Brown could be in line for a big game. The Jaguars have actually been solid against the run this season, but have allowed an opponent QB rating of 116.8 and the second most big plays in the NFL.

Here are our picks for our week 5 optimal lineup, but, again, we would also consider a Burrow/Chase stack, Tannehill/Brown stack, and would also hedge against fading Derrick Henry with a lineup as well.

For those of you that don’t already have a DraftKings account, use our current promo code to get a free entry into the Week 5 Millionaire Maker. Existing DraftKings users can lock in a $50 bonus and free $250,000 entry with our current SuperDraft bonus offer.

Daniel Jones has quietly become not only one of the better fantasy quarterbacks in the NFL but one of the top players in the league. He is currently the sixth highest-graded QB on PFF, despite a running grade of 58 (3 fumbles, 1 lost fumble). His passing grade of 88 trails only Tom Brady and Russell Wilson.

Jones’ price on DraftKings is nearly 3x his floor and is a number he has reached 5x for in half his games this season. Obviously, the matchup with Dallas is ideal. Whether on the ground, through the air, or both, we know the Cowboys’ offense is going to put up points and that Jones will be forced, once again, to try and keep pace.

Swift’s 2021 trends should guarantee he has relatively low ownership this week. He has reached value against two tough out-of-division opponents at home and put up duds playing at NFC North opponents. The Lions travel to Minnesota in Week 5 without Pro Bowl center Frank Ragnow, which should limit what Jamaal Williams is able to do between the tackles.

The Vikings are off to a terrible start against the run this season and are coming off of a week 4 game against the Browns where they allowed Chubb and Hunt to rack up 169 yards on 35 carries. Swift was questionable heading into week 4, but managed to rack up 52 snaps and a 73% snap count against the Packers. If the Lions are trailing the Vikings early, Swift could see a heavy snap count again here in week 5.

Admittedly, we don’t feel great about paying $5,600 to start Williams here in week 5, but the Bears are going to have to run the ball against the Raiders, as Vegas has been great against the pass and awful against the run all season. Like Swift, Williams should see even more action in the passing attack if the Bears are trailing early here.

Jefferson is in line for a smash week 5 performance against a Lions team that has zero corners left on the roster. Cousins has crushed the Lions over the past three seasons and has done so despite Adam Thielen underperforming in all six matchups.

Detroit is allowing 10.6 YPA and has given up 19 passing plays of 20+ yards in four games. This should lend to at least one big play for Jefferson, but we think he could end up with two long touchdowns here in Week 5. He has the highest upside of any receiver in the main slate.

Godwin is in a clear target-heavy matchup against the Dolphins here in week 5. Miami is extremely sticky on the outside, but Justin Coleman in the slot is a clear weak spot. Given Godwin has taken nearly all of his snaps out of the slot this season, this makes him the matchup for Brady to exploit.

Godwin has reached 3x value only twice in four games but did hit 4x value in week one against the Cowboys which would be our target number this week. The last time we saw a clear mismatch for this Bucs offense was in week 3 against a Rams defense that can’t cover opposing running backs. Gio Bernard caught 9 passes on 10 targets in that game. Clearly the Bucs know how to identify and exploit mismatches, which bodes extremely well for Godwin this week.

Green Bay has been great at taking away big passing plays all season, but with Jaire Alexander out, we are betting Chase has a big game here in Week 5. While you could make the argument that Boyd actually has the best matchup, given the fact that King will shift to the outside bringing a new starter into the nickel, it is the upside of Chase vs. King that we are chasing here.

Assuming Rodgers is able to keep pace with Burrow, this could end up being a shootout, which is why we recommended a Burrow stack in the intro. If you do role with a Burrow stack, we would be certain to include Davante Adams. Here is a look at one way to build this lineup: 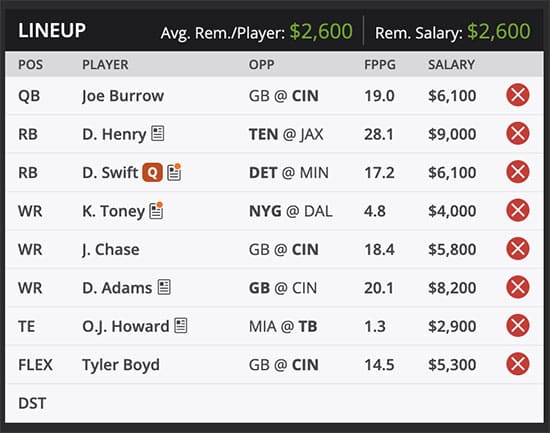 While we will certainly have shares of Kadarius Toney this week, like the Chase play, it is Golladay’s big-play ability that has our attention. The Dallas defense has allowed the same number of big plays as the Lions and Jaguars, and no QB in the league pushes the ball downfield as much as Daniel Jones. While Golladay’s longest catch on the season is only 21 yards, he remains a guy that can win every 50/50 ball, and it is just a matter of time until he has a boom game in this offense.

The Bucs are allowing the third-most DraftKings PPG to opposing tight ends this season, and with Brissett at QB and a thin receiving corps, we think Gesicki sees double-digit targets this week. Gesicki is averaging well over 3x value with Brissett as the starter the last two weeks, and this is an even better matchup.

Also worth a look? Ricky Seals-Jones is going to see a 100% snap count for the Vikings this week and, at the minimum $2,500 salary, could find his way to 3x+ value with a sorry 4/35 stat line against the Saints. O.J. Howard threw up a dud in his first Gronk-less opportunity last week, but we think he could bounce back against the Dolphins. Howard’s snap count was promising, and like Godwin, he could benefit from just how good the outside corners are for Miami.