Four weeks into the season and the injuries are piling up, COVID has struck with Cam Newton, Maurice Hurst, and Adam Humphries (amongst others), and we are officially into bye season with both Detroit and Green Bay off this week. Nevertheless, we have a 12 game main slate this week and FanDuel and DraftKings have combined to make ten different DFS players millionaires already this season.

We will update this article throughout the week as more COVID-related news comes out. Subscribe at the bottom of this article to receive our final picks on Sunday.

The Prescott/Cooper/Lamb stack has now taken down two of the four Millionaire Maker contests but face a Giants defense that is top 5 in the NFL in total defense through four weeks. Will you chase that trend or look to one of the other games on this slate for your lineups? 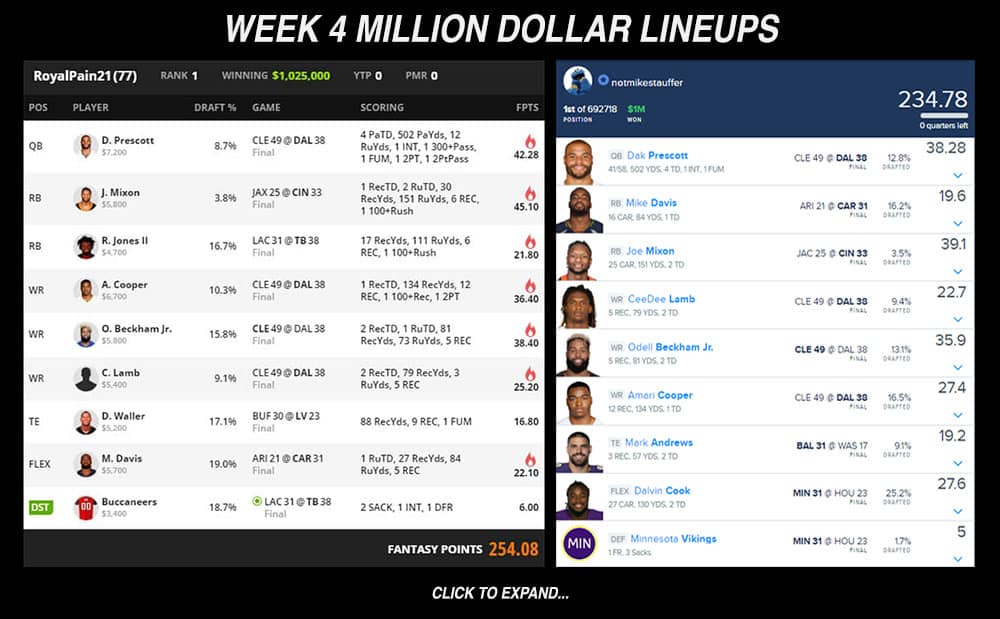 DraftKings Salary: $5,900   |   FanDuel Salary: $7,800   |   Yahoo Salary: $30
For the second time (week one) in five weeks, we are rolling with Teddy Bridgewater as our primary QB play. Playing in Joe Judge’s system, with a loaded group of pass-catchers, Bridgewater was our sleeper pick at QB to start the season. While the start has not been quite as hot as we expected with only four passing touchdowns in four games, we think Teddy backs up his 27+ point week four performance with another big game in Atlanta.

The draw is obvious. The Falcons are allowing the most fantasy PPG to opposing quarterback at 32.5 FPPG, nearly 6 FPPG more than the second-worst pass defense. Additionally, neither of these teams has been overly efficient on the ground, both averaging fewer than 112 rushing YPG over their last three games. This one has shootout written all over it, which should not come as a surprise as 3 of Atlanta’s 4 games this season have gone over 56 points.

DraftKings is offering its best new player promo code offer of the 2020 season this week. The new offer includes a free Millionaire Maker entry and 20% deposit bonus that caps at $500. Follow the link below to learn more about this offer. 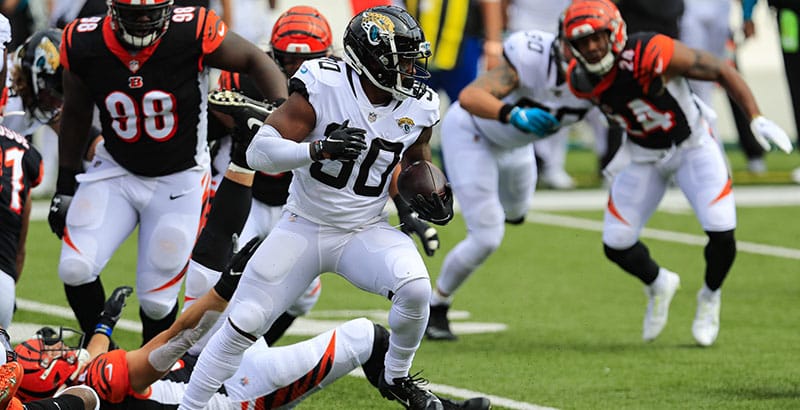 DraftKings Salary: $7,000   |   FanDuel Salary: $6,900   |   Yahoo Salary: $24
Unfortunately, all three of my RB picks this week come in over $6,700 this week, but if you look back at this season’s Millionaire Maker winners, aside from major injuries creating value (Jeff Wilson. Rex Burkhead, Leonard Fournette), these middle-upper RB’s have been a mainstay in winning lineups.

Henry should be in a great spot as a high-ceiling play with low ownership. Buffalo’s defense has been amongst the best in the NFL over the past two seasons, but their offensive efficiency has created opportunities for opposing offenses.

On the season, they are allowing 25 PPG despite opening the year with the Jets and Dolphins. Their time of possession is down considerably year-over-year, and the one above-average rushing attack they faced this season (the Rams) racked up 157 yards and 2 touchdowns on 32 carries. I think Henry has a legit shot at matching those numbers here in week five.

DraftKings Salary: $6,800   |   FanDuel Salary: $7,500   |   Yahoo Salary: $27
We have seen Edwards-Helaire’s ownership percentage plummnet since putting up a dud against the Chargers in week two, and while I think he will be a popular play this week, I do not see him being overly-chalky.

The matchup is phenomenal. The Raiders run defense has been atrocious this season, ranking in the bottom-seven in rushing yards allowed, yards-per-carry allowed, and rushing touchdowns allowed. They have also given up an additional 270 receiving yards to running backs, and come into this week surrendering nearly 38 fantasy PPG to opposing running backs.

Following games against the three of the top ten defenses in the NFL, Edwards-Helaire is due for a repeat of his week one performance and we think he gets it here in week five.

DraftKings Salary: $6,700   |   FanDuel Salary: $5,300   |   Yahoo Salary: $13
Robinson has been nothing short of amazing through the first four weeks of his NFL career. Not only is he eighth in the league in rushing yards, but he has averaged 2.6 yards per route run (second only to Alvin Kamara). His 76% snap share in week four was the highest to date this season and we expect that number to only increase as the season wears on.

His week five opponents, the Houston Texans, are an absolute dumpster fire on defense. They have glaring holes in their secondary, which has forced them to allow opponents to bleed the clock by pounding the run. The Texans have allowed an NFL-worst 727 rushing yards through four weeks, and their 24:15 average time of possession is almost two full minutes worse than the 31st ranked Cowboys.

Robinson put up 31 fantasy points on 17 touches (45% snap share) in a week three matchup with the Dolphins, and we like this matchup even more.

DraftKings Salary: $5,900   |   FanDuel Salary: $8,800   |   Yahoo Salary: $35
Like Bridgewater, Anderson made our 2020 season long sleeper article and finds himself in our picks for a second time this season. Similar to why we targeted Will Fuller in last week’s article, Anderson is a big play receiver in a matchup with a team that gives up a ton of big plays. Atlanta has allowed 21 passing plays of 20+ yards this season, that is the most in the NFL. On the year, they are allowing the league’s third-highest YPC and fourth-highest completion percentage. They just flat out can’t cover.

Anderson has nearly 30 more fantasy points than DJ Moore through the first four weeks, despite receiving only two more targets than Moore. We said in week one that Anderson is more than a deep threat, is a guy that can run the complete route tree, and could turn into a legit NFL #1 WR in Brady’s system. He currently sits sixth in the league in receptions and receiving yards, and you could make the argument that this is his best matchup to date.

DraftKings Salary: $5,100   |   FanDuel Salary: $6,100   |   Yahoo Salary: $22
Of all the weeks for Russell Gage to put up a monster stat line, this is the one. If you remember back to week two, when the Seahawks tried to cover Edelman with Jamal Adams, it did not work out well for Seattle. Well, that is exactly what Carolina has gottent away with doing all season long.

Donte Jackson and Rasul Douglas have been great on the outside, but their nickel corner role has defaulted to safety Jeremy Chinn. To his credit, Chinn (who is not strong in coverage even by a safety’s standards) has yet to be truly exposed. We think Dirk Koetter, Matt Ryan, and Russell Gage find a way to change that narrative.

Gage reached value for his $5,100 salary in weeks one and two, but has been relatively quiet since. Given the matchup, the game script we expect here, and the fact that Julio looks like he could be out, I think he is a lock to reach value again here in week four.

DraftKings Salary: $4,000   |   FanDuel Salary: $5,700   |   Yahoo Salary: $17
In Eric Ebron we trust this week… god help us. Pittsburgh tight ends have been miserable for the entirety of Randy Fichtner’s tenure, and Ebron has been anything but consistent thoughout his career. That being said, if it is going to happen for him with the Steelers in 2020, it better happen this week.

George Kittle exploited what has been a problem for the Eagles secondary throughout their early 2020 campaign. They flat out can not cover the tight end position. On the year, opposing tight ends have caught 26 of 30 targets for 257 yards and 5 touchdowns. It’s now or never Ebron… looking forward to watching you put up a dud on Sunday.

Join our nearly 57,000 subscribers and have our week four picks sent direct to your inbox next week. It’s free, we never spam and you can unsubscribe any time!