We are banking on Brian Robinson having another big game in Week 11 for our DraftKings Millionaire Maker lineup!

Let’s get right to it this week. A great week in DFS play could mean extra cash in your pocket for the holiday season. Here are our best plays for the DraftKings Week 11 millionaire contest. 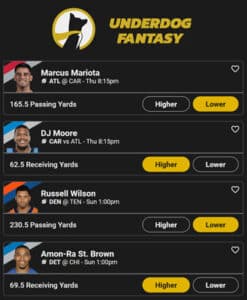 Underdog pick’em contests are the easiest way to win money in DFS. Pick over/under for popular stat categories to multiply your entry as you would a parlay at a sportsbook. Use promo code ROOKIE to get the best available Underdog bonus, a 100% deposit bonus, up to $100!

Did we mention that he’s facing off against the Falcons? Fields might just break 50 points this week. Until he proves us otherwise, plug-in fields into your DFS lineups.

It appears that the answer to: “Antonio Gibson or Brian Robinson?” was a resounding yes. Both Gibson and Robinson had fantastic games against a tough Eagles defense on Monday Night Football.

We’re expecting both to have huge weeks against the dreadful Houston Texans defense, which is why, for the first time all season, we’re recommending two players from the same backfield.

The Commanders ran the ball 49 times against the eagles, and they’re slated to do more of the same against the Texans this week.

Darnell Mooney is coming off a 9.7-point performance. However, in his two games before that, he scored 17.5 and 12.0 points. We’re predicting another strong performance from Mooney this week, given that the Falcons are giving up 45.8 points per week to wide receivers. Darnell Mooney should be a great DFS play this week, especially given Justin Field’s meteoric rise as of late.

Terry McLaurin and his quarterback, Taylor Heinicke, are developing quite the rapport. In their four games together, McLaurin is averaging 18 points per game. The Washington Commanders take on the Houston Texans this week, so he will have ample opportunities to take the top off the defense and have several long receptions.

Justin Jefferson is the most expensive player on this entire slate for a reason- he’s going to score the most points this week. We need him in our DFS lineups. He’s coming off a 38.3-point performance, and this Vikings offense is showing no signs of slowing down.

*Disclaimer* If Daniel Bellinger does not play this week, we recommend taking Dawson Knox for the same price point.

With the Bellinger disclaimer in mind, let’s dive in. When he has been on the field, Daniel Jones seems like he is placing more and more trust in Bellinger.

In his last 4 full games, Bellinger has garnered 5, 3, 3, and 5 targets. The Giants are taking on the Lions this week, who are giving up the third-most fantasy points to tight ends this season. Take Bellinger this week, if he plays.

Darius Slayton is putting together a fantastic season. In his last three games, he’s scored 18.5 points, 11.6 points, and 14.8 points, respectively.

Pairing Slayton’s recent success with the pitiful Detroit Lions defense is a great combination this week. Detroit’s secondary has been struggling all year long!

The Lions are allowing a staggering 29.9 points to opposing wide receivers. Slayton should have a field day against them on Sunday.

When we saw the cost of the Jets’ defense this week, we couldn’t help but plug and play them in this DFS lineup. Robert Saleh has this unit playing with a new swagger and ferocious attitude!

Seems like the perfect storm for the Jets to have a monster week on the defensive side of the ball. Take the Jets with confidence this week.